Please fill the contact form for any question or order.

An excavator is a big, diesel-powered construction machinery that uses its bucket to dig trenches, holes, and foundations in the ground. It’s a common construction machinery on big construction sites. Excavators can drive piles, clear brush, load and dump, level a jobsite, and execute other heavy-duty jobsite duties by switching out the bucket for another attachment. A boom, dipper, and bucket form an excavator. These components are connected to a cab that rotates around the house. The majority of houses are able to rotate 360 degrees. Depending on the manufacturer and the design of the project, excavators may be equipped with tracks or wheels.

A payloader is a four-wheeled earthmoving construction machinery, which usually has a front-mounted bucket for scooping, holding, and transporting loosely packed materials including sand, gravel, and pulverized minerals. A wheel loader, scoop loader, or bucket loader are another names for the same unit. Payloaders are mostly used to load materials into trailers and trucks, for pipe laying works, debris removal, and digging works. A payloader is not the most effective machine for digging because it cannot dig very deep below the level of its wheels unlike a backhoe or an excavator. Depending on the size of the system and its application, capacity of a payloader’s bucket may range from 0.5 to 36 cubic meters. The bucket size of a front loader is usually much larger than that of a backhoe loader.

A backhoe is an excavation construction machinery that consists of a traditional tractor base with a jointed two-part arm supporting a digging bucket. The front loader attachment on the opposite side of the backhoe is commonly used so the seat rotates 360 degrees to enable the operator to face whichever side is being used at the moment. The boom is the component of the backhoe arm that connects to the tractor, and the dipper is the section that carries the digger bucket.   Drills, rakes, hammers, rippers, breakers, and other attachments can be mounted to backhoe. Brooms, plows, and forklifts can also be seen in place of the front loader. Through looping the straps of a lifted object over the dipper, a backhoe may also function as a crane in some situations. Telehandlers are specifically designed for material handling and movement, and by mounting various attachments, this flexible construction machinery can conform to a range of works, such as staging initial materials at the beginning of a project, moving palletized and suspended loads, and construction site cleaning at the end of a project.

A crane is a large type of construction machinery that is used to lift loads horizontally. It can be used to carry large loads or move them to other locations since it is equipped with ropes and sheaves. The mechanical advantages provided by the crane’s various elements can provide a significant strength. A crane, equipped with pulleys and cables and built by considering basic mechanical concepts, could lift and lower loads that no any human can do. Crane design has been developed to meet the requirements of a wide range of industrial works, and modern cranes often combine basic structures to perform complex lifting works – often in potentially hazardous conditions for human workers. It is one of the tallest cranes in the world. Its height usually exceeds that of the building that it helps in the construction of building. It is usually a fixed crane that is built on-site. The crane is backed by a vertical metallic mast and has a horizontal boom that lifts the weights. The horizontal boom has a 360-degree rotational capability.

A concrete pump is a construction machinery that is used to carry and pour concrete to sites that may need work to be done well above the ground. For example, whether you are working on a high-rise building or a block of flats, it can be difficult to bring concrete or cement up to such a height. In other words, a concrete pump is a powerful construction machinery that is used to pour concrete at high elevations that simple methods for pouring are not possible. If you are pouring concrete above ground, behind an obstruction, or off road in soft terrain that can not support the concrete vehicle, you can either transport it with a conveyor, an excavator and bucket, wheel barrows or pump it. Pumps are the quickest and most efficient choice.

On the back of the concrete pump, there is a hopper that feeds a powerful pump, which drives concrete into pipe parts along an extended boom that can stretch over 40 meters. For the pump to work properly, the concrete shouldn’t be too dry to flow and the aggregates should be uniform in size and shape.

A transit mixer is a construction machinery that is used to transport concrete/mortar or ready-mix directly from a batching plant to the site where it will be used. The Transit Mixer is filled with both water and dry mixtures. Pile driver machine is a construction machinery that is designed to hold and align the piles in the proper place when driving the piles into the soil. This equipment can also be used to remove piles from the earth. Pile-driving machinery needs a weight-lifting unit and a driver, which is generally mounted on a pile driver or a truck tractor and etc. One kind of pile driver works with a weight that is mounted between guides and slides vertically. It is positioned over a pile. The weight is lifted, which can be accomplished by the use of hydraulics, steam, diesel, or manual labor. When the weight reaches its maximum height, it is released and hits to the pile, driving it into the earth. 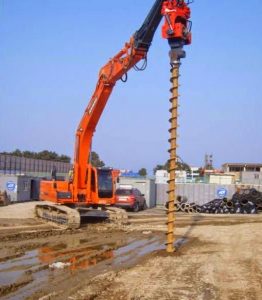 The piles with kelly bar execution is a very flexible system. This is the method used to execute the most complex piles in deep foundations There are several pile forms that can be assembled using a telescopic Kelly bar machine. The drilling tool is mounted at the lower end of the Kelly bar, which is constructed of pipes of varying diameters that form a telescopic pipe assembly, allowing for the drilling of very deep holes. The following is the execution sequence: Drilling and excavation of all soil, leaving an open round hole, placing of steel cage, direct pouring of concrete into tremie pipe.

Grader is a construction machinery that is almost all seen on road projects, infrastructure projects, and building projects, helping to level the ground to a suitable level for construction. The structural stability of the project is compromised if the ground is not sufficiently compacted and graded before construction begins. Graders begin working after the heavy construction machinery, such as excavators or bulldozers, has completed their part of the work. They use a long bladed attachment to flatten surfaces, grade soil, scarify layers, compact roads to a simple gradient, and give the groundwork a finer finish. A compactor is a kind of construction machinery that applies pressure to soil, reducing air bubbles and allowing the soil to support heavy weights on even surfaces. Roller compactors and flat plate compactors are the two major kinds of compactors. It is very important to choose the correct type of compactor for your project in order to maximize productivity and profits.

Dump truck is a heavy construction machinery that is used to move large amounts of loose materials such as clay, sand, ores, asphalt, and demolition waste through mines, civil, and major construction sites. If your next building or mining project necessitates the transportation of loose stuff, you’ll most probably need a dump truck. Rigid rear dump trucks and articulated dump trucks are the two most popular types of dump trucks for hire. Dump trucks are usually loaded with gravel, sand, or minerals by another machine before transporting and dumping their load at a specified place. As a result, the dump box, which is operated by hydraulics and allows operators to lift and tip loads, is the most important function of a dump truck. Hydraulic hoist mechanisms are used to move the dump box when it has to be emptied.

We have seen the construction machinery and equipment in this article. Hope you enjoyed it!

2 thoughts on “Construction Machinery and Equipment”